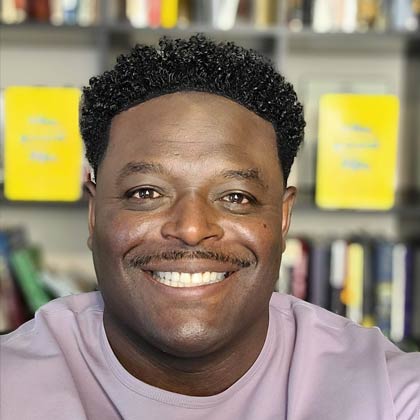 Dr. Derwin L. Gray is the founding and lead pastor of Transformation Church, a multiethnic, multigenerational, mission-shaped community in Indian Land, South Carolina, just south of Charlotte, North Carolina. Gray met his wife, Vicki, at Brigham Young University (BYU). They have been married since 1992 and have two adult children. After graduating from BYU, he played professional football in the NFL for five years with the Indianapolis Colts and Carolina Panthers.

In 2008, Gray graduated from Southern Evangelical Seminary magna cum laude with a Master of Divinity, with a concentration in Apologetics. While there, he was mentored by renowned theologian and philosopher Dr. Norman Geisler. In 2018, Gray received his Doctor of Ministry in the New Testament in Context at Northern Seminary under Dr. Scot McKnight. In 2015, he was awarded an honorary doctorate from Southern Evangelical Seminary. Gray is the author of “Hero: Unleashing God’s Power in a Man’s Heart” (2009), “Limitless Life: You Are More Than Your Past When God Holds Your Future” (2013), “Crazy Grace for Crazy Times Bible Study” (2015) and “The High-Definition Leader” (2015).

Where We Find Happiness

with Derwin Gray
How can we truly be happy? FamilyLife Today hosts Dave and Ann Wilson talk with Derwin Gray about his new book, The Good Life, and fulfilling the longing in our souls. View Show Notes →

with Derwin Gray
We all get discouraged, but according to former NFL football player Derwin Gray, it is possible for you to really live "The Good Life." Join us today with hosts Dave and Ann Wilson on FamilyLife Today. View Show Notes →

The Playbook for Heroes

with Derwin Gray
Even Superman would struggle to meet the obligations and duties that face the average man! View Show Notes →

with Derwin Gray
Inside every good man is a hero. View Show Notes →

with Derwin Gray
It’s not what you do, but who you know. View Show Notes →