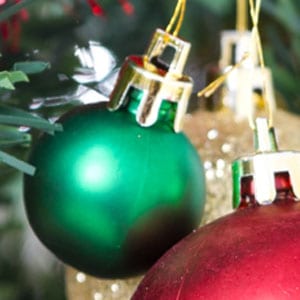 F
00:00
Keith and Kristyn Getty remind us the reason for the season.

Keith and Kristyn Getty remind us the reason for the season.

Bob:  And welcome to FamilyLife Today.  Thank you for joining us on the Monday edition.  It’s Christmas Eve!

Dennis:  I’ll tell you, it is so much easier as an empty-nester!  We used to sprint our way to the finish line—up at midnight—you know, hanging stockings and stuffing them, putting cookies out and notes,—

This—this is how God intended it—a grandparent surrounded by 19 grandkids, just enjoying life and spoiling the daylights out of my grandkids.

Bob:  You have earned your reward!  Is that it?

Bob:  For sugaring the kids up!

Bob:  Well, I thought that, today, as we prepare for Christmas, we ought to tune our hearts—

Dennis:  Well, if you like a little Irish accent, you’re going to love, not only the reading of Scripture, but some of the finest songs being written today.  We love the Gettys.

Dennis:  Keith and Kristyn Getty are just a pair of great songwriters, and singers, and performers.  What better way to celebrate Christmas Eve than to focus on our Savior by singing some of the timeless hymns of the faith and doing it with a little upbeat sound to it?

Bob: Well, we also asked Kristyn if she would read some of the Christmas story from Luke 1 and 2 because I really think, in heaven, we may all have Irish accents.  There’s something about hearing the Scriptures—in fact, I was—

Dennis:  But wouldn’t Alistair Begg have a problem with that.  [Laughter]  I mean, he’s from Scotland—so, he probably wouldn’t go for that.

Bob:  Well, we’re going to listen together!  Here are Keith and Kristyn Getty with an Irish rendition of a Christmas hymn that is all about tidings of comfort and joy to tune our hearts for Christmas.

In the sixth month, the angel Gabriel was sent from God to a city of Galilee named Nazareth, to a virgin betrothed to a man whose name was Joseph, of the house of David. And the virgin's name was Mary. And he came to her and said, “Greetings, O favored one!  The Lord is with you.” But she was greatly troubled at the saying, and tried to discern what sort of greeting this might be.  And the angel said to her, “Do not be afraid, Mary, for you have found favor with God. And behold, you will conceive in your womb and bear a son, and you shall call His name Jesus.  He will be great and will be called the Son of the Most High. And the Lord God will give to Him the throne of His father David, and He will reign over the house of Jacob forever, and of His kingdom there will be no end.”

Kristyn:  [Singing Joy to the World]

And Mary said to the angel, “How will this be, since I am a virgin?”

And the angel answered her, “The Holy Spirit will come upon you, and the power of the Most High will overshadow you; therefore, the child to be born will be called holy—the Son of God. And behold, your relative Elizabeth in her old age has also conceived a son, and this is the sixth month with her who was called barren. For nothing will be impossible with God.” And Mary said, “Behold, I am the servant of the Lord; let it be to me according to your word.” And the angel departed from her.

In those days Mary arose and went with haste into the hill country, to a town in Judah, and she entered the house of Zechariah and greeted Elizabeth. And when Elizabeth heard the greeting of Mary, the baby leaped in her womb. And Elizabeth was filled with the Holy Spirit, and she exclaimed with a loud cry, “Blessed are you among women, and blessed is the fruit of your womb! And why is this granted to me that the mother of my Lord should come to me? For behold, when the sound of your greeting came to my ears, the baby in my womb leaped for joy. And blessed is she who believed that there would be a fulfillment of what was spoken to her from the Lord.”

“My soul magnifies the Lord,
and my spirit rejoices in God my Savior,
for He has looked on the humble estate of His servant.
For behold, from now on all generations will call me blessed;                                        for He who is mighty has done great things for me,
and holy is His name.
And His mercy is for those who fear Him
from generation to generation.
He has shown strength with His arm;
He has scattered the proud in the thoughts of their hearts;
He has brought down the mighty from their thrones
and exalted those of humble estate;
He has filled the hungry with good things,
and the rich He has sent empty away.
He has helped His servant Israel,
in remembrance of His mercy,
as He spoke to our fathers,
to Abraham and to his offspring forever.”

Kristyn:  [Singing Magnificat (A song based on Mary’s words in Luke 2)]

In those days a decree went out from Caesar Augustus that all the world should be registered.This was the first registration when Quirinius was governor of Syria.  And all went to be registered, each to his own town.  And Joseph also went up from Galilee, from the town of Nazareth, to Judea, to the city of David, which is called Bethlehem, because he was of the house and lineage of David,to be registered with Mary, his betrothed, who was with child. And while they were there, the time came for her to give birth. And she gave birth to her firstborn son and wrapped him in swaddling cloths and laid him in a manger, because there was no place for them in the inn.

And in the same region there were shepherds out in the field, keeping watch over their flock by night.  And an angel of the Lord appeared to them, and the glory of the Lord shone around them, and they were filled with great fear. And the angel said to them, “Fear not, for behold, I bring you good news of great joy that will be for all the people.  For unto you is born this day in the city of David a Savior, who is Christ the Lord. And this will be a sign for you: you will find a baby wrapped in swaddling cloths and lying in a manger.”  And suddenly there was with the angel a multitude of the heavenly host praising God and saying,

“Glory to God in the highest,
and on earth peace among those with whom He is pleased!”

Kristyn:  [Singing Joy Has Dawned (A song of the Promised One’s humble birth)]

When the angels went away from them into heaven, the shepherds said to one another, “Let us go over to Bethlehem and see this thing that has happened, which the Lord has made known to us.”  And they went with haste and found Mary and Joseph, and the baby lying in a manger. And when they saw it, they made known the saying that had been told them concerning this child.And all who heard it wondered at what the shepherds told them.  But Mary treasured up all these things, pondering them in her heart. And the shepherds returned, glorifying and praising God for all they had heard and seen, as it had been told them.

Bob:  Well, that’s Keith and Kristyn Getty; and that’s their friend Deborah, playing the fiddle there.  Last time I saw her, she was great with child.  I think she should have delivered by now or very soon she will be having a baby.

Dennis:  And there was another baby born—we celebrate His life this Christmas Eve and Christmas Day.  If you’re heading to your family’s house, either today or tomorrow, be careful as you’re driving and watch out for a herd of gummy bears because the gummy bears can cause real problems on the highways.  [Laughter]

Bob:  We hope you have a wonderful celebration of the birth of Christ.  We hope you’ll join us back tomorrow when we’re going to learn an amazing story of a woman who learned, as her father was dying—she learned for the first time—that she had been adopted.  We’ll hear that story tomorrow.  I hope you can join us for that.

I want to thank our engineer today, Keith Lynch, and special thanks to Phil Krause for today’s program.  On behalf of our host, Dennis Rainey, I’m Bob Lepine.  Join us back tomorrow for another edition of FamilyLife Today.  As we conclude today, here is an Irish Christmas Blessing from Keith and Kristyn Getty.  Merry Christmas!

Kristyn:  [Singing An Irish Christmas Blessing (A song of God’s peace and guidance to be with you beyond Christmas)]

FamilyLife Today is a production of FamilyLife of Little Rock, Arkansas.

Help for today.  Hope for tomorrow.

Title:      Joy Has Dawned / Angels We Have Heard on High

We are so happy to provide these transcripts to you.  However, there is a cost to produce them for our website.  If you’ve benefited from the broadcast transcripts, would you consider donating today to help defray the costs?

with Jennie Allen August 10, 2022
Having little kids can mean a season of profound loneliness for young moms. Author Jennie Allen explores how to find community by doing life together.