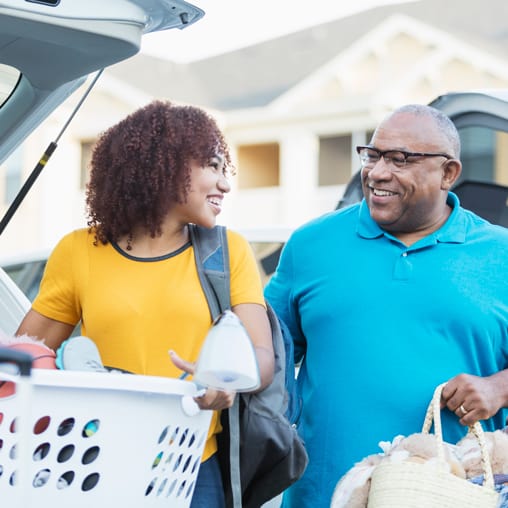 F
00:00
Whether you are sending a child to college, or you are planning a wedding, releasing children can be difficult. Barbara Rainey, Susan Yates, and Bruce Johnston share how they managed this pivotal transition.

Whether you are sending a child to college, or you are planning a wedding, releasing children can be difficult. Barbara Rainey, Susan Yates, and Bruce Johnston share how they managed this pivotal transition.

Bob: Well, let me ask both of you. If you had to define a mother's role and responsibility, during the empty nest period, does she have any responsibility before God to continue to be a mother during this period? If so, what she's supposed to do—

Susan: That's a great question; let me give it a stab.

Susan: I think one of the things that will help us balance between being the helicopter or hovering parent and being the hands-off parent would be a scenario like this: your freshman in college calls. She is miserable! She has not been accepted into the right group of girls; a certain boy broke up with her; she doesn't know how to make a decision about a class—she's in a tough place for whatever reason.

They don't necessarily need us to fix it, to bail them out, or to go and intervene on their behalf. What happens—when we go and intervene on their behalf or we say, "Okay, I'm so sorry you're so miserable; come home. You don't have to stay at that school,"—what we're really saying to them is: "You can't handle it; you need me." Even though our intentions are right in that we want to be a good parent, we're undermining the very thing that we want to give them.

We want to give them confidence. It is really best to do all that we can to have this balance of being interested/validating the feelings; but then quickly saying, “You will make a great decision. You can stick this out”; because that builds their confidence when they may, themselves, be lacking.

Barbara: Well, I think it depends on the kind of setup you have in college. Most college students are there because mom and dad are helping in some form or fashion. They may not be footing the entire bill/they may just be paying for part of it, or they may just be helping you with your car; but there is some involvement, usually, by parents in their lives.

I think if the parents have an involvement/if they are supporting the child, then you have some accountability. I would be calling and saying, "What's happening? How are you doing? How are classes?" I want to be involved at that level, but I wouldn't rush up there unless I knew that there was a real urgent situation.

Dennis: In college, I think you have a certain responsibility; because, as you said, Barbara, you're still supplying some of the financial support. It's a transition into adulthood at that point. After they get married, I think you've got to get off the teeter-totter.

Susan: The most awkward time is in the first launching of the empty nest/when they first leave,—

Susan: —because that's when you're a little more involved than you are later.

Susan: But the priority relationship becomes their relationship with their spouse. Your daughter calls you—and she's married—and she says, "Dad, what kind of car do you think we should buy?" Your response should be, "What does your spouse think?”

Susan: So that we are giving advice, but our first role is to turn them to each other, not to make them dependent upon us.

Michelle: Great advice from Susan Yates and Barbara Rainey on how to effectively get used to that empty nest, and how to parent our children as they face those transitions of slowly moving into adulthood.

It kind of reminds me of that final scene of Father of the Bride—you know, where George Banks hasn’t gotten to dance with his daughter; he hasn’t gotten to see his daughter at the wedding—but she calls him from the airport. And that is that point, where he finally just gets to release her—to shoot that arrow from the quiver—so to speak.

Parents, it is a hard job! You’ve been raising these kids for so long. Whatever transition you’re facing now, whether it’s from preschool to kindergarten, or grade school to high school, or high school to college, or maybe there’s a wedding in your future; it’s hard, but it’s good.

You know, Susan Yates and Barbara Rainey sat down with Dennis Rainey and Bob Lepine for five whole days, talking about the difficulties and also the joys of releasing your children. We have links to those programs on our website; go to FamilyLifeThisWeek.com; that’s FamilyLifeThisWeek.com.

Hey, next week, we are going to spend a little time with FamilyLife® board member and pastor, Bryan Carter. One of his passions is seeing families thrive. He’s going to be talking about how to build a strong family: “Just what does that take and what does it really look like?” I hope you can join us for that to get a vision for your family.

Thanks for listening! I want to thank the president of FamilyLife, David Robbins, along with our station partners around the country. A big “Thank you!” to our engineer today, Keith Lynch. Thanks to our producer, Marques Holt. Justin Adams is our mastering engineer, and Megan Martin is our production coordinator.

with Michael Kruger August 15, 2022
Are your kids college-ready? Michael Kruger, author of Surviving Religion 101, examines how to prep teens for surviving religion—and keeping the faith.