Go Back To All Parenting Challenges Articles

Talking To Your Kids About Cohabitation

My daughters are only 9 and 7 years old, but that hasn’t stopped my wife and I from talking with them about various issues we feel are important they hear about from us first. We’ve had discussions about a number of topics—including, oddly enough, the subject of cohabitation before marriage.

You might think I’m a bit early in talking about material like this with my elementary school-aged children. But I’d like you to consider why this conversation might be a good one to have with your own kids.

My girls are well aware romance, dating, and marriage are a huge part of society, and as a result, they have a ton of questions related to romantic relationships and how they typically work. Consequently, we’ve been able to build a framework for them about what is good and what is bad based on what the Bible communicates to us on how we are to live as Christ followers.

Not only is this relatively easy to explain based on what Scripture clearly communicates about God’s view on sex, but it also has given me the opportunity to talk about why cohabitation is foolish … even from a secular point of view.

The foolishness of cohabitation

Here are three points you can make about the folly of cohabitation before marriage as you begin to discuss it with your kids:

1. Cohabitation has no “safety net.”

Many couples who move in together before they get married think cohabitation will provide them with a safety net in case their relationship suddenly ends. They have the belief that it affords them the security of testing things out without the pressure of binding commitments.

Research has consistently shown, however, the cords of the cohabitation safety net do not hold up under pressure, nor do they typically last long term. Of all the studies that have been done with couples who live together, the facts communicate over and over again that cohabitation before marriage actually puts couples at an increased risk of getting a divorce one day. Not to mention that research has shown living together has been consistently associated with poorer marital communication, lower marital satisfaction, and higher levels of domestic violence.

Whatever “safety net” many believe cohabitation provides—it’s clear the safety net itself is imaginary.

Cohabiting homes, as opposed to married homes, are significantly more prone to falling into poverty. Why? Because unmarried people living together, regardless of how much money they have, tend to manage their funds differently than married people.

It comes in at the same speed of the average married person but goes out at a much quicker rate. And the reasons as to why this happens aren’t terribly perplexing. Spending, rather than saving, is the default setting if a person isn’t married. Couples who simply live together seem to amount to a pair of spenders under the same roof instead of a committed married couple planning and saving for the future.

For example, if a man with an aloof attitude toward money ends up moving in with a woman with a similar attitude—carefree about where her dollars go—the combination can lead to serious problems. Incorporate that with dinner dates, entertainment, streaming services, gifts, new furniture, etc., the bills start to pile up quickly. Cohabiting couples can easily become blind to how much money they are actually spending on a day-to-day basis and therefore save less for the future or for an emergency situation.

For cohabiting couples, one income plus one income doesn’t lead to double the money.

Download a free 30-day guide to praying for your children.

Moving in with someone is not a step toward, or even a convenient test for, a long-lasting, satisfying relationship. Many find the whole experience to be a proverbial sugar-substitute when it comes to relationship needs. It doesn’t gratify the longings we have for authentic connection and commitment with another person, because that’s something only a marriage relationship can do.

If we’re called by the Lord to be with someone romantically, we can’t expect cohabitation to do for us what only marriage is able.

We should take the time to explain to our kids there’s a better way. A better plan. A better relationship DNA that encourages more mature romantic relationships. There’s a way to fight for relationships in a way that doesn’t take the path of least resistance as cohabitation does.

Children are remarkably intuitive and surprisingly clever when it comes to understanding what makes sense and what doesn’t. Communicating with them about the foolishness of cohabitation and then helping them to understand the better, biblical way of pursuing their future romantic relationships is one of the ways God can use us to help shape, love, and prepare our kids for the inevitability of growing up and (gulp) moving into adulthood.

What a privilege and honor to be used by God in this way for His glory. May we train up our children in the way they should go (Proverbs 22:6) by illuminating the excellencies of (should the Lord will for them) marriage and imprudence of cohabitation.

Shelby Abbott is an author, campus minister, content creator, and conference speaker on staff with FamilyLife. His passion for university students has led him to speak at college campuses all over the United States and author the books Pressure Points, DoubtLess, and the FamilyLife resource What’s the Point? He and his wife Rachael have two daughters and reside in Downingtown, Pennsylvania. Instagram/Twitter: @shelbyabbott, Web: shelbyabbott.com

When Your Friends are Moving In Together Before Marriage

Your friends are planning on living together before marriage. What’s it look like to be a good friend when they’re moving in together? 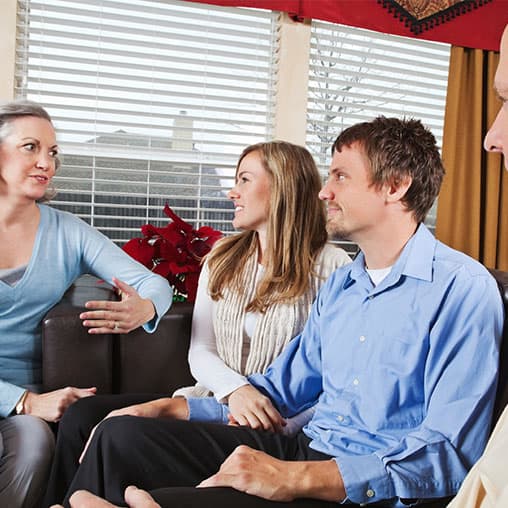 with Ron Deal April 3, 2020
I think it's time to rethink premarital sex and cohabitation.