Go Back To All Raising Boys Articles

How to Raise a Boy to be a Man

My wife endured almost 25 hours of labor to deliver our daughter. So when she went into labor with our son, we thought we had plenty of time.

A mere 30 minutes after making it through the hospital doors, I was holding my son. Suddenly, I felt like I needed more time to prepare. I had been a father for two years, but this felt different. I was now responsible for raising a boy to be a man. Yet I barely felt like a man myself.

Looking at the innocent bundle in my arms, I could see my every fault, shortcoming, and sin reflected at me. Areas of my life I had long chosen to ignore hovered like clouds over my son, waiting to descend and contaminate his purity.

My son’s birth set me on a quest to become the man God intended for me to be so that I might somehow guide my son to the same end. I’ve made plenty of mistakes, but these are the lessons I’ve sought to teach him.

If you are trying to raise a boy to be a man, I hope these principles help.

Raise a boy who…

“The fear of the Lord is the beginning of wisdom, and the knowledge of the Holy One is insight” (Proverbs 9:10).

God is perfect, all-powerful, all-knowing, and omnipresent. The only appropriate posture in the face of such power is reverence, submission, and, yes, a healthy fear.

We watched thunderstorms, looked at stars through a telescope, cells through a microscope, and felt the power of ocean waves. We marveled at creation and how big God must be. But God’s power isn’t limited to nature. So I told him stories of God’s work in my life, both big and small.

Through it all, he learned God was not only powerful, but also good.

“The heart is deceitful above all things, and desperately sick; who can understand it?” (Jeremiah 17:9).

Believe in yourself and listen to your heart is the feel-good moral of children’s stories. The problem is our hearts are inherently selfish. The man who tries to be the “master of his own life” is doing nothing more than making himself out to be a god.

After relaying a story of childhood mischief one evening, my son looked at me in horror, “Dad, how could you?”

“I thought it would be fun,” I said. “But God showed me I was wrong. Son, you’re going to want to do bad things, too, but if you listen for God’s voice, He’ll help you choose the right thing.”

“But he said to me, ‘My grace is sufficient for you, for my power is made perfect in weakness.’ Therefore I will boast all the more gladly of my weaknesses, so that the power of Christ may rest upon me” (2 Corinthians 12:9).

Men are famous for refusing to ask for help. Doing so is often seen, at least by other men, as a sign of weakness. We pride ourselves in being able to do it on our own. But the truth is … we need help.

When our son was 9 years old, I started bringing him to my men’s group at church. I wanted him to witness other men struggle, admit failure, and seek help from each other and God. When he realized even grown men need help, it became easier to ask for it himself.

One day, my son hit his sister because she took his sunglasses. To teach him his sister was more valuable than things, I ripped the sunglasses out of his hand and snapped them in half. He was devastated. And any lesson he might have learned was overshadowed by my own anger. Ultimately, I was the one who was forced to apologize.

“Let every person be subject to the governing authorities. For there is no authority except from God, and those that exist have been instituted by God” (Romans 13:1).

As much as I want to have a friendly relationship with my son, I’m not his friend. I am his father. While it may be wise to share the reasoning behind my decisions, it shouldn’t always be necessary. If my son can’t learn to respect my positional authority and obey, he’ll struggle to submit to authority later (teachers, bosses, police officers, etc.).

But respecting authority doesn’t mean passively accepting every command. Sometimes the authority we are under is unfair, and we must speak up. So we’ve taught him to:

He’s been able to use this technique to respectfully disagree with us, his teachers, and bosses. He doesn’t always get his way, but the interactions have always been positive.

Get together with your friends and learn the Art of Parenting.

My son doesn’t have the gift of administration. He has yet to make it through a school semester without forgetting an assignment or missing a deadline. But unless he’s sick or dealing with an emergency, we’ve made it a point not to step in and smooth things over when he falls behind. It’s his responsibility to talk to his teachers and ask for extensions or make-up work.

“As each has received a gift, use it to serve one another, as good stewards of God’s varied grace” (1 Peter 4:10).

We shovel snow for our neighbors because they’re our neighbors. We help around the house because it’s our house. From cooking dinner and doing the dishes, to setting up the bagels at church and loading the truck for Operation Christmas Child, helping others is just what we do.

We don’t pay our son for being helpful or allow him to accept money from others for regular acts of kindness. There’s a time for earning money, but only after a heart of service has been firmly developed.

“No servant can serve two masters, for either he will hate the one and love the other, or he will be devoted to the one and despise the other. You cannot serve God and money” (Luke 16:13).

It’s good to have financial goals, but if we’re not careful, we can be trapped by them. To put money in its proper place, we try to teach our son to follow a simple formula:

This formula isn’t magic, but giving to God first, paying our bills second, and playing last, has helped us to master our money—not the other way around.

“Likewise, husbands, live with your wives in an understanding way, showing honor to the woman as the weaker vessel, since they are heirs with you of the grace of life, so that your prayers may not be hindered” (1 Peter 3:7).

The first lessons our son learned about honoring women came by observing the way I treated his mother. My son sees my expressions and hears the words I say whether out loud or muttered under my breath. No matter how angry I get, I don’t ever want him to catch me disrespecting his mother.

We don’t share “Atta boy” jokes about being a “stud” or gawk at pretty girls, even when his mother isn’t around. Boys will be boys, unless we train them to be men.

Is prepared for battle

With so much emphasis given these days on helping men embrace their sensitive side, it’s easy to forget: we must also train our sons for battle. We must teach them to be bold and courageous; to take up the cause of the orphan, the widow, and the weak, through both prayer and action.

I’ve tried to teach my son to be wise, pray, and avoid conflict, but I’ve also taught him first aid, CPR, and how to defend himself and others.

Jesus is described in Scripture as the Lion and the Lamb, but we often forget the Lion part. When we don’t train our sons for battle, we raise a boy who will grow up to be a passive man.

My son just started his senior year of high school in a turbulent time. The normal concerns of his age are compounded by a global pandemic and social unrest.

But despite having little control over what the future may bring, the one thing I can say is this: I like the man he is becoming.

He defends weaker classmates from bullies, absorbs insults and injustices with poise, and even finds ways to have political conversations with “the other side” that strengthen friendships instead of destroying them.

Almost there on my quest to raise a boy to be a man, I’m finding I like the man he is becoming. I wish I could be more like him.

Copyright © 2020 by FamilyLife. All rights reserved.

Carlos Santiago is a senior writer for FamilyLife and has written and contributed to numerous articles, e-books, and devotionals. He has a bachelor’s degree in psychology and a master’s degree in pastoral counseling. Carlos and his wife, Tanya, live in Little Rock, Arkansas, with their two children. You can learn more on their blog, YourEver After.org.

5 Ways My Dad Helped Me Transition into Adulthood

As I made the transition into adulthood, I knew I could always count on my dad. Here are five ways he helped me grow as I became a young adult. 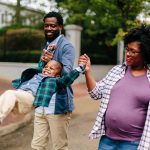 Fearfully and Wonderfully Made

with Jasmine Holmes October 14, 2020
Jasmine Holmes knows what strong parenting looks like. But that didn't shield her from the pain of casual prejudice growing up. Now a young mom, she shows her son he is "fearfully and wonderfully made."