A Remodeled Barn and a Transformed Marriage

There are places in our lives that bring back hard memories … ones we sometimes wish we could forget.

But if we did forget, would we remember the journey? Would we be able to trace the hand of God and recall how He did what we had called impossible?

Jim and Penny Nally’s barn is one of those places. Once a haven of escape for Jim in their troubled marriage, today the remodeled building reminds the Nallys that even in their darkest times, God had a plan. 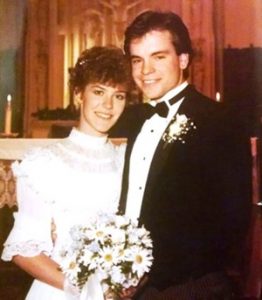 Jim and Penny married in 1985 and were like a lot of young couples. She thought marriage meant living with a lifetime companion, someone to raise a family with. And Jim summed up his expectations for marriage in one word: “Wonderful!”

But it didn’t take long for problems to surface. With each additional child and remodeling project, Jim and Penny drifted further and further apart. Jim says that every time a new baby arrived, he moved down on Penny’s priority list.

Penny, on the other hand, thought Jim should be more appreciative of all she had to do. She wished she could tell him, “Grow up … I have these little people that really need attention and they need me.”

Jim missed the admiring woman who had stolen his heart.

And Penny missed her once-carefree man.

There was never enough money. And, as Jim says, “There was no time for us.”

When the Nallys had been married for about five years, they bought an old abandoned farmhouse. There was a big barn on the property and Jim had a vision for turning it into something more. “I’m not really sure what he was aiming at in the beginning,” Penny says, “but when we would get in arguments … he would always go down to the barn.”

And when they were together, Jim had a habit of asking what Penny describes as suffocating questions: “Why do you do this? … Why don’t you do that? … Do you love me? … How do I know?”

One day, the questioning became too much. As Jim walked toward Penny asking yet another question, she slapped him.

“I can remember when that happened,” Jim says, “… we just knew … it was something we had to address.” So Jim and Penny began to see a marriage counselor.

For a while they were able to talk about their difficulties and not just argue. For a while …  things seemed better.

But within a few years, the old issues resurfaced and arguments were once again the norm.

Working through their issues

Life began to change for the Nallys when Penny picked up a Weekend to Remember® getaway brochure and Jim said he wanted to go.

Both he and Penny longed for hope in their marriage, but weren’t sure about attending a marriage conference with hundreds of people. But by the time the first evening’s sessions were over, he says, “It was about just Penny and me.”

The Weekend to Remember gave the Nallys needed time to talk through their difficult issues. They were surprised to discover that they had each wanted their marriage to work. And for the first time in years, Jim and Penny began to dream together about what they wanted for their marriage.

“I remember talking about some of the things that were important to us,” Jim says. “It was so nice to realize they were common; that we both felt the same way.”

Penny told Jim that she loved him … that she still wanted to spend the rest of her life with him.

And for the first time Jim realized that he and Penny were not meant to make one another happy—that they needed God to make the relationship right. “And we never had Him in [our marriage],” Jim says.

But perhaps one of the most important things that the Nallys’ discovered was a spark of love in their dying marriage. They vowed to do all they could so it would grow.

Applying the blueprints for marriage

After attending the marriage getaway, the Nallys began to put into practice what they learned.

Jim says, “It was very welcomed to have a map or blueprint to start changing [our marriage] and making it better.”

They began to pray regularly together and to read morning devotionals such as Moments Together for Couples and Moments With You. They discovered that the closer they each became to God, the closer they became to one another. And that’s where transition and change started taking place.

They also began going through FamilyLife’s small-group Bible studies for couples with others who attended the Weekend to Remember. They attribute much of their spiritual growth and marital oneness to the support of these friends. Over the past eight years they’ve gone through almost all of FamilyLife’s studies and discussed books such as The Love Dare and The 5 Love Languages.

As the Nallys connected with other couples to strengthen their marriages, Jim says, “I felt like a vision was put into place where we could start making a difference in our community with marriages … because I felt like we were fixing our marriage.”

Over the years, the Nallys have continued to intentionally build into not only their own marriage, but also encourage others. 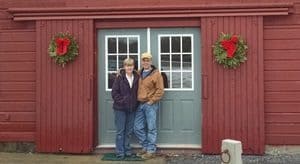 When Jim and Penny walk into the barn these days, they can’t help but remember their marriage journey, the good years and the bad.

“I see how much we are growing each time we do things in there,” Jim says, “It’s awesome!”