Go Back To All Troubled Marriage Articles

Saving a Marriage Through Separation

Thirty minutes into our counseling session, Jeff dropped the bomb.

“On my last business trip, I met someone.”

His wife barely reacted as he told his tale of infidelity. It was as if a part of her already knew and was relieved to finally have it out in the open. There were no tears, no screams—just the expressionless stare of a woman too numb to react.

When he finished talking, she calmly declared, “I’m leaving,” and walked out.

You never know what to expect in the counseling room, but I certainly didn’t think I would lose the couple on our first day. They had been married for 15 years, had two kids, and were both leaders in their church. They even participated in a marriage small group the previous year.

How could it come to this?

Jesus very plainly said, “What therefore God has joined together, let not man separate” (Matthew 19:6). This was such a straightforward statement that many had trouble accepting it. Even His own disciples replied, “If such is the case of a man with his wife, it is better not to marry” (verse 10).

Their reaction makes sense. Especially given that Jesus had just finished explaining how we should forgive those who wrong us “seventy-seven times” (read Matthew 18:21-19:12 for full context).

But in the face of our marital pain, Jesus’ words can feel heartless and out of touch.

Our minds immediately look for wiggle room. “But what if my spouse does ___?” How are Christians to reconcile God’s desire for unity and forgiveness with the realities of living with a spouse who blatantly violates God’s law?

When the apostle Paul discovered a man in unrepentant sin within the church, he was faced with a similar dilemma. He responded, “deliver this man to Satan for the destruction of the flesh, so that his spirit may be saved in the day of the Lord” (1 Corinthians 5:5).

Paul used separation to protect the church. But his goal wasn’t to “get rid of the bum” and move on. His ultimate desire was that “his spirit may be saved.”

Saving a marriage through separation

Before we dive in, let’s get one thing clear: If there is abuse, separation is a necessary first step to protect the life of the abused and get the abuser the help he or she needs. But announcing a desire to separate without first having a plan in place can be dangerous. If you are in an abusive situation, contact the national domestic violence hotline for help making a plan.

For other marriages in which sin is causing staying together to become more damaging that being apart, a temporary separation might be in order—but proceed with caution. Roughly 80% of couples who separate eventually divorce.

If you or someone you know is contemplating a temporary separation, the following points can help improve the chances of a successful reconciliation down the road.

Before deciding anything, talk to your pastor

Before anyone moves out, talk to your pastor and agree to a counseling plan. It’s OK if you meet separately for a time, but it’s critical you both commit to regular counseling. Even if you think you’ve done nothing wrong.

If your pastor is unable to commit to long term counseling, there are many good Christian counselors who can. Even a friendship with a mature believer can help.

Don’t be afraid to reach out.

During the separation, don’t hide from the church

“Therefore, confess your sins to one another and pray for one another, that you may be healed. The prayer of a righteous person has great power as it is working” (James 5:16).

Marital problems are intimate. Our natural instinct is to keep quiet. But If we keep our problems a secret, we interfere with God’s primary method of offering aid—the body of Christ.

Jeff and his wife continued to meet with me separately after our initial encounter, but I wasn’t the only one supporting them. Jeff’s men’s group helped him break off the relationship with his mistress and recommit himself to God. His wife’s friends helped her heal and forgive. Mentors and youth group leaders walked alongside the children, helped them cope, and gave them much needed stability in a time of chaos.

Jeff and his wife sat on different sides of the church, but they never stopped attending. They also never tried to turn friends against their spouse. Because of this, when they wanted to give up, they were able to draw strength from their community and hold on for one more day.

Is your friend's marriage hurting? Learn how you can help.

Remember the goal of separation

The goal of separation is reconciliation, not to go back to the way it was. The “way it was” contributed to where you are now. Use your separation as an opportunity to practice new ways of relating to each other and handling conflict.

God can heal your marriage, even if it takes longer than you’d like.

My grandparents were separated for most of my childhood. But in the end, God took hold of my grandfather’s heart. Afterward, he gathered his children together and publicly asked my grandmother for forgiveness. It was the first time any of his kids saw them hug.

Their separation was long and painful, but God showed that forgiveness and reconciliation are possible. Even when we might not think they are.

Watch out for entanglements

When the bonds of love are strained, it is often the secondary entanglements that wind up holding a marriage together. We stay together for the kids, because of finances, or because the thought of living alone is scary.

But separation necessitates finding new housing, transportation, and childcare arrangements. If you’re not careful, these new entanglements can pull you further apart.

Stay away from signing a long-term lease, taking an out-of-state job, starting a business, or going on a date with someone new. If you hold onto your “new life” loosely, it will be easier to come back together in the future.

See the separation as a time of rest

After a difficult season of marriage, the relative peacefulness of living alone can feel wonderful. But rather than see the peace as God’s confirmation you should divorce, see it for what it is—a time of Sabbath rest.

Use the tranquility to hear from God and begin the healing process. Take time to pray for your marriage and develop a habit of Bible reading. Not to manipulate God into answering your prayers, but so He can reveal areas of your life you need to surrender to Him.

God has not forgotten you. He wants to help your marriage, but He also wants to work in your life to conform you into the image of His Son.

Don’t worry too much about your “rights”

In the early months of Jeff’s separation, he felt like he was being taken advantage of. Paying for a separate apartment and utilities added stress to his already strained relationship. Expenses he gladly paid for while living at home, began to feel extravagant. Each week brought another fight about money.

He asked if he should get a lawyer to protect his rights.

Money will probably be tight during a separation. A lawyer may help you protect assets but will do little to save your marriage. Take care not to worry so much about protecting your rights that it becomes an additional barrier to reconciliation.

Financial pressure, parenting pressure, social pressure, loneliness, and shame can all work to make you want to “get back to normal” as fast as possible. But don’t rush it.

The average length of separation for those who ultimately reunite with their spouse is two years. It can be hard to work on something for so long without seeing immediate progress.  It takes diligence and commitment to stay engaged that long.

Try not to let too much time go by without a call or a text. Take the time to relearn how to talk over the phone and settle disagreements without hurting each other.

Ask for forgiveness and pray for the ability to offer it yourself.

When you are ready, date your spouse again.

When you do come back together, celebrate the moment and let others know what God has done.

It took a year and a half of hard work, but Jeff and his wife were eventually able to recover from his affair.

While neither one of them would have chosen the path they took, their marriage is stronger now because of it. They learned how to talk openly about struggles and temptations and have a deep support system of friends who have walked with them during the most difficult time of their lives.

God not only restored their marriage, He made it better than it ever was before.

“Therefore, if anyone is in Christ, he is a new creation. The old has passed away; behold, the new has come” (2 Corinthians 5:17).

Carlos Santiago is a senior writer for FamilyLife and has written and contributed to numerous articles, e-books, and devotionals. He has a bachelor’s degree in psychology and a master’s degree in pastoral counseling. Carlos and his wife, Tanya, live in Little Rock, Arkansas, with their two children. You can learn more on their blog, YourEverAfter.org.

The Divorce Announcement Shouldn’t Have Surprised Me

We'd been sufficiently warned. We were working against all the odds to stay together: divorced homes. Demanding careers. And now, a chronically-ill child. 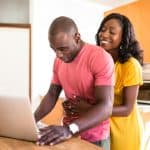 Press Through the Struggle

with Ron Deal June 30, 2020
Ron Deal explains that marriage, while typically a two-person dance, gets complicated as couples try to manage all the lives around them. He encourages couples to hold onto God's hand and never give up.