Go Back To All Men Articles 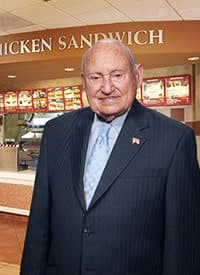 He was a kingdom man who loved the King of kings.  Years ago Chick-fil-A invited me to speak at a conference for its operators, and I remember hearing Truett talk about a young man who was a successful fast-food operator in Louisiana.

Truett was interested in meeting the young man, so he flew him to Chick-fil-A’s headquarters in Atlanta.  And during their meeting he used the “Romans Road” gospel presentation to tell the young man how he could know Christ as His Savior.  His guest responded by praying and receiving Christ as His Savior.  And as Truett told the story I could see that he cared about much more than growing a successful business.

His kingdom mentality was central in his decision to close every Chick-fil-A franchise on Sundays. His desire to serve God and serve others is reflected in every Chick-fil-A employee.  Every time I eat at Chick-fil-A and say “Thank you” for the excellent service, the reply is always the same: “My pleasure.”

He was a man who loved his wife and family.  He was committed to his wife of 65 years, proud of his three children and 19 grandchildren and 18 great-grandchildren.  He was pleased with how his family adopted his values and determination to serve Christ.

He was a generous man with a strong interest in helping young people.  Organizations such as the WinShape Foundation, WinShape Homes, WinShape Camps, and WinShape Retreat have provided scholarships, care for orphans, help for married couples, and much more.  For 50 years he taught a Sunday school class for 13-year-old boys because he believed that young boys who are pointed in the right direction will grow up to become godly men who will help change the world.

Truett Cathy was a true patriarch for Jesus Christ.  A man of God who didn’t just create a business, but looked for ways to serve and help others throughout his life.

I treasured my friendship with Truett, and I already miss him.  When I think of this godly man, I recall the words of Psalm 112:1-5:

Blessed is the man who fears the Lord, who greatly delights in his commandments!  His offspring will be mighty in the land; the generation of the upright will be blessed.  Wealth and riches are in his house, and his righteousness endures forever.  Light dawns in the darkness for the upright; he is gracious, merciful, and righteous.  It is well with the man who deals generously and lends; who conducts his affairs with justice.

If we had more business leaders like him—who left legacies of value and who loved and cared about people until the end—this would be a different nation today.

Copyright © 2014 by FamilyLife.  All rights reserved.

with Dennis Rainey June 30, 2022
What could you do to offer friendship and support to a military family?