Go Back To All Cultural Issues Articles

Naturally, kids love to ask questions. Some are simple, while others are existential in nature. “Daddy, are we safe?” is a question I never imagined I would find so difficult to answer. But with recent events, I find myself unsure of how to respond to my three young kids.

We are a Chinese American family witnessing a 150% spike in anti-Asian violence during the COVID-19 pandemic. Independent organizations have surfaced over 3,800 incidents nationwide (and in every state) because many states do not have a reporting structure for these types of crimes.

Which makes even me wonder: Are we safe? How do I teach my kids about anti-Asian racism? And how do I keep them safe?

The answer is very complex, because racial bias is in the water of which all of us swim.

We can be empowered by the Holy Spirit to have wisdom on how to make a difference with grace and righteousness. Here are a few practical ways the Christian community can help Asian families feel safe:

When I was an adolescent growing up in Cincinnati, Ohio, I wrestled a lot between being an American or a Chinese. At 9, I declared to my mom that I was American—not Chinese. I’ll never forget the message she told me, “No matter how much you act like them, they will never accept you as one of them.”

It was a bold statement, but she spoke to a real experience in our community that we are a minority who had been mildly acceptable, yet never really white enough.

How do I teach my kids that they will be seen as perpetual foreigners in the country we were born and raised in?

This wrestling match was especially difficult because I didn’t speak Chinese. Still, I was asked if I could say something in Chinese in front of my high school history class. I felt so much shame that I was different from the norm and began resenting my ethnicity as God made me.

How do I teach my kids (especially my daughters) that people judge them to be “Orientals?”

There was a joke on the TV show The Office (I love this show), where the ignorant and well-meaning boss, Michael Scott, approaches new associate Karen Fillippeli. He says, “Wow, you are very exotic looking. Was your dad a GI?” She stares off in a mix of disbelief and disgust as the most egregious part is that Karen’s mother was not a Vietnamese prostitute from the war. It highlights a historic racist stereotype that Asian women are exotic, sexual objects of the western man’s affection.

Which makes the 2021 Atlanta shooting even more poignant. Even if the alleged shooter’s motive was driven by sexual addiction and not COVID anti-Asian racism, he still murdered six Asian women he interpreted as sex workers in a massage parlor.

I urge our Christian community to avoid requiring victims to justify their pain. Do not overly fixate on the motive of the murderer as opposed to the dignity and the humanity of those who lost their lives. I plead that we can say and learn the names of these victims. And together admit, no matter what they did in this life, they did not deserve MURDER.

Consider Jesus in John 11. He could have easily told a grieving Mary to stop crying because He’s about to raise her brother Lazarus from the dead. Instead, He actually weeps with her, and in verse 36 the onlookers say, “see how much He loved him.”  Jesus’ seemingly illogical tears serve a purpose to showcase how Christians ought to love.

So please don’t tell my parents why you think they don’t need to be afraid if they walk through Chinatown; instead, weep with them.

Don’t say the shooter wasn’t a racist because he was trying to overcome a sexual addiction; instead, mourn the trauma of what the victims’ deaths represent to the Asian American community.

The Christian response is to comfort and be present in another’s grief, not rationalize its necessity.

Do you remember when the U.S. had concentration camps? Actually, we used the word “internment” for the incarceration of 120,000 innocent Japanese Americans by Franklin D. Roosevelt’s Executive Order 9066 in 1942. But the definition of what was done matches “concentration camp” more accurately. History chose a softer word so it could hide the pragmatic discrimination against the “Japs.”

How do I teach my kids that in the history of this country Asians in America have been treated as scapegoats? You might remember from high school reading about Jim Crow, but do you remember learning about “Yellow Peril,” The Page Act of 1875, or the Chinese Exclusion Act of 1882?

These laws halted immigration from China due to the dominant sentiment that Asians did not belong in this country, Asian women were immoral, and their culture was an existential threat to the American way of life. These laws were not repealed until 1943.

Paul is seeking to relate to every type of person he ministers to for the sake of the gospel. The word “win” denotes a sense of gaining for oneself, in this context, relationship. Winning someone over is not simply convincing them of an agenda, it’s gaining a friend by understanding their lives.

Click for your FREE guide, Praying with Your Family for Racial Reconciliation

The Christian community tends to stay relatively silent about social issues and focus their efforts solely on the spiritual truth of the Gospel. Can we acknowledge that perhaps loving our neighbor as ourselves is a spiritual issue and a Gospel issue that was mandated in the origins of Jewish law, “love your neighbor as yourself” (Lev. 19:18)?

Pray as a family for the Church to see the kingdom of God as the kaleidoscope of all ethnos in their unique expressions of the character of the Maker. And consider as a family, “How can we be better neighbors?”

It’s the job of all Christians to identify and acknowledge racism and unconscious racial bias or favoritism (James 2:1). And then join together to take action against it.

Many organizations are doing good work to make people aware of Asian American Christians and how they help build the body of Christ, such as the Epic Movement or the Asian American Christian Collaborative. Also, consider StopAAPIhate.org as they compile information. Report incidents when you see them. The security camera footage of an Asian woman being brutally beaten in front of onlookers who closed the door on her should make us all sick. As Christians, we must all overcome the bystander effect and take action as Jesus did.

To be honest, I don’t know the answer to the original question: “Daddy, are we safe?” But with the recent rhetoric calling us a virus or a “kung-flu,” I know we are experiencing the trauma and fear racism causes.

My friends have been verbally abused, stared at, and some physically confronted. Will I be confronted one day? Will my kids be subject to bullying? Or worse?

The call to keep our kids safe is the responsibility of all parents. Keeping them safe also means speaking out against injustice of all types. Crimes against one part of the body do injury to us all.

As followers of Christ we have a responsibility to show God’s love to Asian neighbors, families, and all hurting people so the world could be won over to Christ.

“For God so loved the world, that he gave his only Son, that whoever believes in him should not perish but have eternal life” (John 3:16, emphasis added).

Tony Wee serves as the Executive Director of Field Expansion for FamilyLife. He received a Masters of Divinity from Talbot School of Theology and has been a missionary with Cru for 18 years. He lives in Washington, D.C. with his wife, Steph, and three kids.

Learning to Love All People

The truth is, God has one big, beautiful diverse family—by design and for His glory. And as believers we share a common identity in Him. 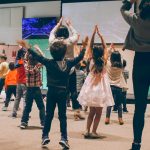 with Alex Kendrick October 22, 2020
As Christian parents, we desire to raise our children to become kids of faith. Filmmaker and actor Alex Kendrick gives us five helpful things to help parents foster an environment for that to happen.