‘I’m So Grateful to Know I’m Not Alone’

Josh and Tracey Devine were at the end of their marriage. After seven years, Tracey was tired of being the wicked stepmother. She tried to be a good stepmom, giving his three kids discipline and setting rules. But Josh didn’t support her, often siding with the children. So she moved out.

Their relationship didn’t start out this way, of course. When they met, Josh was a happy, every-other-weekend kind of dad. Tracey came into his life while he was training with the Air Force, and their relationship moved fast. After 30 days they were engaged, and they married after 6 months. Tracey had no kids of her own, and didn’t plan to have any. And both of them were perfectly happy with this life. 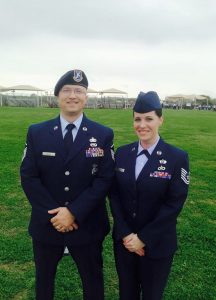 A change of plans

Their arrangement worked for several years until Josh’s oldest daughter turned 15 and started getting into trouble. Her mom asked Josh to allow the teenager to move in with him. “Tracey didn’t sign up for that contract,” he says. But the couple agreed it was best.

The following summer, his two younger children came for their regular extended visit. But to Josh and Tracey’s surprise, they were coming to stay. The Devines rearranged their house, bought a bigger vehicle, and became a full-time family.

Tracey soon found out being a full-time stepmom was harder than she expected. The children didn’t respect her. But what was worse, Josh continually put the children before her. When she put her foot down about discipline issues, he acted as if Tracey was overreacting. She felt all four of them were united against her.

Things were falling apart fast, so Tracey joined a community stepmom group for support. The group introduced her to some helpful material, including resources from FamilyLife Blended.

Tracey “strategically” placed these books around the house so Josh would see them. But he had no desire to read any of it. “I thought they just wanted to hate on men, and make me look stupid,” Josh says. When he did read something, he interpreted the content in a way to support his position. Instead of bringing them together, it drove them apart.

That’s when Tracey moved out. She was financially stable and independent. With no biological children of her own, it would have been easy to walk away. But Tracey and Josh didn’t want their marriage to fail. They still loved each other. After six months of separation, they got back together “by God’s grace,” Josh says.

After their oldest daughter graduated high school, Josh got a job transfer with the Air Force, and they moved to Alabama, the two younger children in tow. With a new office and new surroundings, they decided to make a fresh start of their marriage. They evaluated their lives and discussed what they needed to change.

But the real change started when one of Josh’s new co-workers mentioned going to church. “He hadn’t found a house yet, because he was waiting and praying to find the right church,” Josh explains. “I had never met anyone who thought that way.”

Both Josh and Tracey were slightly familiar with religion. Josh had a childhood friend whose father was a pastor, and in high school, Tracey went to youth group with her friends. But neither of them had ever been “church people.” The couple agreed this was something they were missing, so they decided to try it out.

On their first visit, they “felt a sense of safety, security,” Josh says. “It felt like home.” From the moment they entered the parking lot, the couple was impressed by the smiling faces and welcoming atmosphere. “There was no judgment at all,” Josh says. “These people never saw us before in their lives, but they greeted us like we were their neighbors.”

Find more like this in our online course just for blended marriages!

Tracey immediately started looking for a local support group for stepmoms or stepfamilies, but there wasn’t one. The church had no resources for blended families and she could not find any in their local area either.

Then one day, Tracey announced to Josh, “We’re leading a small group.” She decided if no one else had the resources, she and Josh could facilitate a group. They would use a DVD curriculum she learned about through her stepmom group by Ron Deal, called The Smart Stepfamily.

What Tracey didn’t know was that Josh actually had been peeking inside those books she placed around the house, particularly The Smart Stepfamily. But now Josh was going to lead a group, so he had to immerse himself in the material. That’s when everything changed.

From page one, Josh was hooked. Every story in the book made Josh and Tracey feel understood. They were no longer alone in their struggles. “It was like Ron knew who we were. He was telling our story,” Josh says.

As the Devines facilitated the class, Josh became a different man. “He learned how to listen,” Tracey says. “He started stepping up and supporting me. We could communicate, and he started really listening for the first time.”

Their marriage and family were saved, but their story didn’t end there. After reading The Smart Stepfamily, the Devines developed a thirst for more of God’s Word. 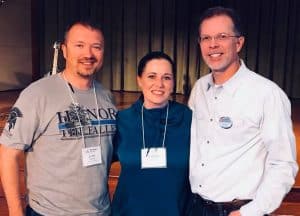 They also have a personal library collection of stepfamily resources, which mainly includes materials from FamilyLife Blended. Josh says, “It looks like Ron Deal threw up in our house.” Whenever someone at church needs stepfamily information, the Devines are their go-to couple.

Once at their church during prayer, a woman thanked God for where Josh and Tracey had been and how He’s using them. “That’s when I realized God allowed us to go through what we did so others don’t have to,” Josh says. Tracey agrees, “We can tell them what not to do!”

The Devines are eager to discover God’s plans for their next phase of life. All three children have graduated, and they are ready to help even more blended families thrive.

Their vision all boils down to one “magical phrase” uttered by a woman in their small group. After introducing herself and telling her story, she started crying. With tears streaming down her face she said, “I am so grateful to know I’m not alone.”

“Those are the moments that make it all worth it,” says Josh.